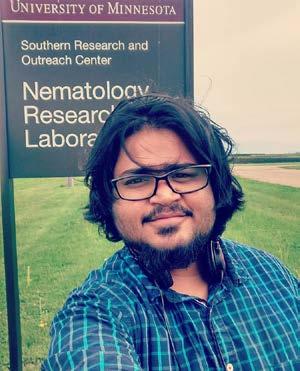 In May, Plant Pathology graduate student Deepak Haariith defended his thesis by Zoom, with more than 80 people attending on-line. Soon afterwards, Deepak gave one of the 2020 commencement addresses for the College of Food, Agricultural, and Natural Resource Science. Deepak had worked with Kathryn Bushley and Senyu Chen as his advisors, focusing on fungal antagonists of soybean cyst nematode. In June, Deepak left Minnesota for the University of Wisconsin to begin a post-doc working with Professor Andrew Bent.

The Aurora caught up with Deepak by Zoom while he was finishing up work on the four refereed publications that came out of his thesis research. Here is a lightly edited version of our interview with Deepak.

AURORA: Can you tell us a little bit about the research that was behind your recent papers?

DEEPAK: They're all connected and each publication is a continuation of the previous one. The main project was to go and look at a natural system where nematode densities were going down without any intervention and to try and identify what was going on. Before I joined Professor Bushley and Professor Chen’s project, preliminary data suggested that fungi were responsible for reducing nematodes in those fields, so we looked into what kind of fungi live there. We recovered about 5000+ isolates. In my research, I identified those isolates and clustered them into groups using both morphological and molecular techniques. Later, I screened those groups to see which ones actually affect nematodes negatively so that they might be used as a biocontrol agent. 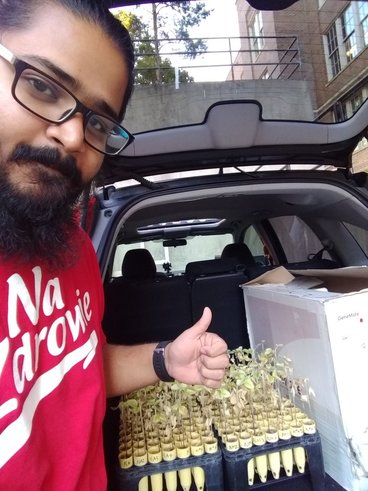 My screening was done in two different ways. One was in vitro, which was just laboratory setup, and then from that, 20 isolates were shortlisted and tested in two different levels in the greenhouse. In this way, we could actually see the effect in a more natural system with the plant in the soil with nematodes and see how these fungi can affect both the plants and the nematodes. Our goal was to develop effective fungi into a biocontrol agent and for farmers to use.

AURORA: What are you hoping to be the practical outcomes of the research that you accomplished in those publications?

DEEPAK: So far, we've been consciously avoiding a public disclosure of more details about the fungi that worked for us, as it's likely that we will file a patent.

Some of the strains act as mixtures, not just a single individual organism. So, at the moment, we're talking to the university patent attorneys, as well as people who work in patent filing and other professors who have filed patents before. We are also doing some more experiments to substantiate our claims, so that we may file the patent. Since this research was funded by the Minnesota Soybean Growers Association, the patent will help us develop products to be used in Minnesota, because these fungi were cultured out of a Minnesotan field. That means we could have better products for local farmers with a biological product that works in our particular location. Remember, biologicals that work in one location might not work in another. For example, something that was discovered in Florida might not work here. So, this would be a local product for Minnesota. Growers will be able to use it once it gets patented and a company starts mass producing it, but we're working on getting the results verified for now.

The way we inoculate these fungi is very similar to a product that already exists in the market. Unlike hyphae or freeze-drying the thallus of the fungi, spores are freeze-dried and adsorbed onto an inert surface, like soluble starch or nonfat dry milk. In my experiments, I've also looked at freeze-drying these spores on nonfat dry milk and then putting them into pots with soil and plants and seeing if that has any effect compared to directly harvesting the spores and putting them into a pot. We chose these spores because they're naturally very resilient and are also resilient towards freeze-drying or any other form of desiccation and they can come back to life when proper conditions are available. This is a spore-based product and it's a bulk broadcast method that we’ve played with so far. There are other methods that we could try, like coating the seeds with the spore suspension. but so far, this seems to work. Anyway, there's already a product out there which uses this technology, so this is a credible technique. 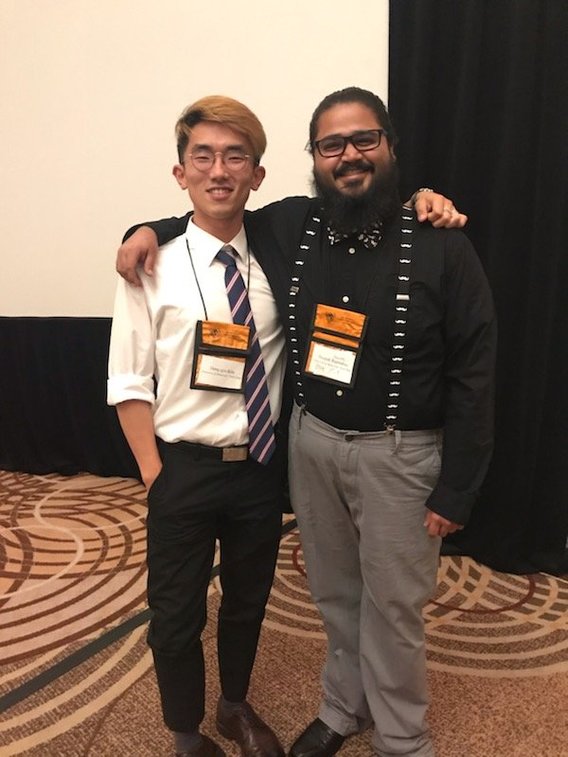 AURORA: Okay, last question. What do you think you'll be doing in 10 years?

DEEPAK: In 10 years’ time, I would like to be an expert in plant pathology, especially in nematology. Ideally, I’d like to hold a tenure track position by then and start working with policies related to agriculture, because the place where I want to be in 10 or 15 years ultimately, is to be someone who is consulted and actively involved in making policies related to agriculture, production and disease management.