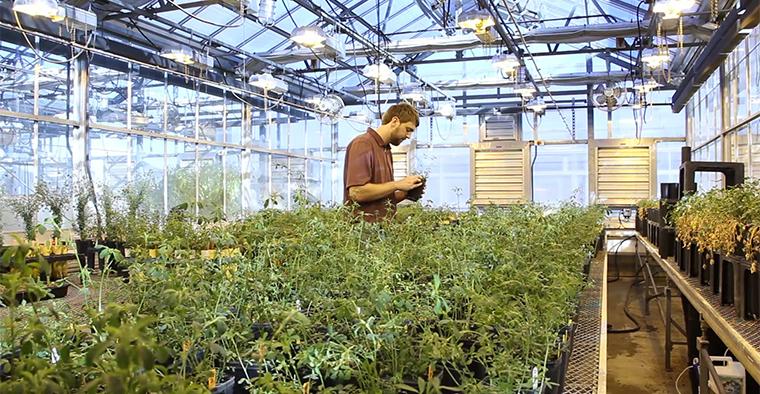 While all plants have ways of protecting themselves against disease, Plant Pathology Ph.D. student Andrew Sathoff is researching ways to enhance alfalfa’s natural defense system to combat a complex disease.

Sathoff is trying to find ways to prevent yield losses from crown rot, a disease that occurs in all alfalfa growing regions and is present in every alfalfa stand over a year-old. This disease is commonly found in farmers’ fields due to the nature of the alfalfa harvest season. When alfalfa is harvested the crown of the plants are wounded, allowing the entrance pathogens into the plants. Since alfalfa is harvested three to four times per season this increases the chances of plants being infected.

Crown rot is a difficult disease to control since it is a disease complex, meaning that the disease is actually caused by multiple different kinds of diverse pathogens. Within this disease complex there can be fungal and bacterial pathogens, and the pathogens causing the disease might shift depending on the location or the seasonal environment. Once infected crown rot leads to yield reductions, and if there are high amounts of disease pressure, farmers may be forced to replant their stand completely.

Currently, farmers have limited solutions for control since there are no fungicides on the market that have the persistent root and crown activity required to be effective against these pathogens. There also are no varieties of alfalfa resistant to crown rot due to the complex nature of the disease.

“Since there is not one consistent pathogen breeders are dealing with, this has made it difficult to develop resistant varieties,” says Sathoff.

In order to work towards creating an alfalfa variety that has increased broad resistance to crown rot, Sathoff is looking to defensins, proteins that are a component of plants’ natural defense system, for the solution.

Defensins are proteins that plants naturally produce in order to fight against diseases caused by fungi and bacteria. When defensins come into contact with fungal and bacterial pathogens, they attack the membranes and ultimately destroy the pathogens.

Sathoff is evaluating the diverse array of defensins produced by different plants and testing how effective they are against all fungal and bacterial pathogens involved in the crown rot disease complex. Based on those results the defensin that is most effective against the disease will be identified. Having this information is the first step toward creating future alfalfa lines that have broad resistance to crown rot.