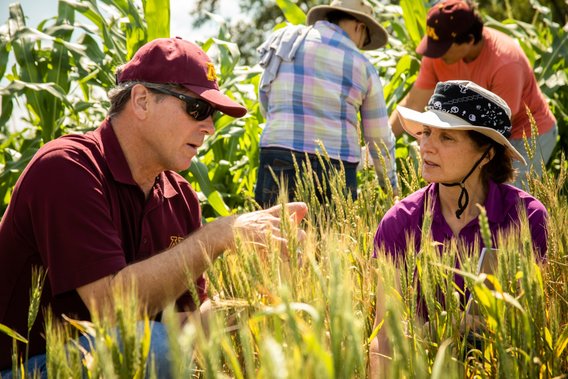 When the average consumer takes a bite of a sandwich or scoops up a spoonful of cereal, they may not realize that the essential grain they’re enjoying — wheat — supplies approximately 20 percent of the caloric intake for humans globally. It also is an ancient grain, tracing its origin to the Fertile Crescent some 10,000 years ago. Today, wheat is grown around the world on 215 million hectares, an area equivalent to the size of Saudi Arabia, and is consumed by 2.5 billion people in 89 countries.* In Minnesota alone, farmers grow about 1.5 million acres of wheat each season.

With wheat playing a key role in ensuring global food security, it is critical for farmers to control the rusts and fungal diseases that can completely destroy crops over a wide area in just a few weeks. Wheat rust, so named for its characteristic orange pustules resembling iron oxidation, can infect the plant’s stems and leaves, causing severe losses in both the yield and quality of grain. Throughout the centuries — as far back as ancient Rome — the rusts have caused famines and ruined economies. In the U.S, the Upper Midwest region suffered devastating epidemics of wheat stem rust in the early 1900s, 1930s, and 1950s. Breeding wheat varieties with resistance is one of the best means of controlling rust diseases... More HERE