Read the article on APS 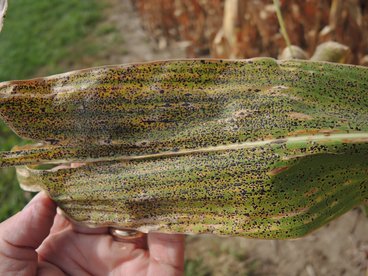 The disease known as tar spot is spreading in Minnesota’s corn fields, and now it should be easier for growers and researchers to identify thanks to this new publication in the Plant Health Progress Journal. José Solórzano, Brett Arenz, and Dean Malvick have just published a diagnostic and methods guide for tar spot of corn in collaboration with Christian Cruz from Purdue University and Nathan Kleczewski from GROWMARK.

Tar spot of corn is an emerging disease in Minnesota caused by the fungus Phyllachora maydis. While the disease was first found in the continental US in 2015, tar spot has been known to occur in Mexico, the Caribbean, as well as in Central and South America since the early 20th century.

José and colleagues’ research is filling a current void. Lack of previously existing information about the biology of the pathogen and epidemiology of the disease has made tar spot of corn a challenge to diagnose, especially when combined with the disease’s appearance: the black oval to elongated spots  that characterize the disease have several look-alikes.

The practical information in the publication, from symptoms and signs for diagnosis to pathogen identification and isolation, is all an important framework and starting point for future work designed to protect corn production.