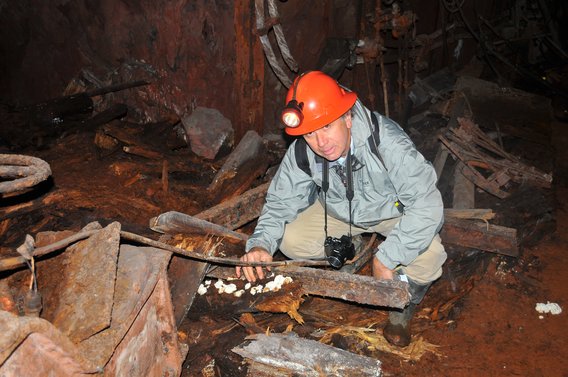 The Aurora caught up with Professor Bob Blanchette, whose lab recently published two articles about unusual fungi found in the Soudan Mine of Northern Minnesota. Prof. Blanchette worked with a graduate student, Laim Genter, and scientist, Benjamin Held, to discover new fungi that are able to survive in this highly unusual environment. These papers came out in the journals, PloS ONE and the Journal of Natural Products, in mid-2020.

AURORA: So, you've recently published some new research in scientific journals. What are some highlights?

BOB BLANCHETTE: There were two publications that came out dealing with fungi that are associated with mines and caves. This is a bit different than the normal research that we've done in the past, and it investigates fungal diversity that exists in these unusual subterranean environments. This work funded by the Minnesota Environmental and Natural Resources Trust Fund (funds from the Minnesota lottery). We're working in the Sudan mine, which is an old iron ore mine in northern Minnesota. In the mine, our original research was to take a look at what fungi are present in these high heavy metal environments. The mine actually has thousands of wooden timbers used to make railroad tracks for iron ore carts and for beams and supports. The mine is about ½ mile deep and has 18 tunnels going off in different directions. Some of these tunnels are also very long. Throughout this extensive network of tunnels, there are wooden timbers everywhere including areas with high concentrations of heavy metals. When we first went into the mine, we realized that there were lots of fungi and they were growing all over the place. The wood was acting as a carbon source for these subterranean fungi to grow on.

As we were doing this work, we also had the opportunity to start looking at the White Nose Syndrome of bats. This disease had just come into Minnesota and was present in this mine. We were looking at the microflora in the mine before the White Nose syndrome disease arrived, but then also were able to continue looking at microbes in the mine after its arrival. So, our objectives were several-fold. One was to just look at the ecology of these fungi in subterranean environments, but also to see if we can find fungi that can be used for bio-processing that can tolerate and sequester heavy metals. A third objective was to see if we could find antagonists that could be used to help control the White Nose Syndrome fungus and be used for potential biocontrol.

AURORA: Do you have answers to any of those questions yet?

BOB BLANCHETTE: We have two publications that have just come out. We looked at the diverse fungi that are in the mine and have been able to identify them. Altogether there are 164 different isolates and a very interesting aspect is that we have 46 taxa that appear to be new species and do not match any known sequences in Genbank or other databases. That means we have lots of new fungi to further investigate. We started testing our isolates to see if any of these inhibit the White Nose Fungus, which is Pseudogymnoascus destructans.

We found that the White Nose Syndrome fungus is present in the mine itself and not only on the bats. We can find it in the walls, floor, and ceiling of the mine. We also found fungi that are antagonistic to the white nose fungus that inhibited it. We’ve taken those and, in cooperation with Christine Salomon in the Center for Drug Design, determined which compounds were inhibitory to the White Nose fungus. One particular genus Oidiodendron truncatum was especially interesting and Christine has found new compounds, which are norditerpene oidiolactones from the fungus, that appear to have success in inhibiting it

AURORA: What are some ways that people outside the Department of Plant Pathology are likely to be impacted by your results? 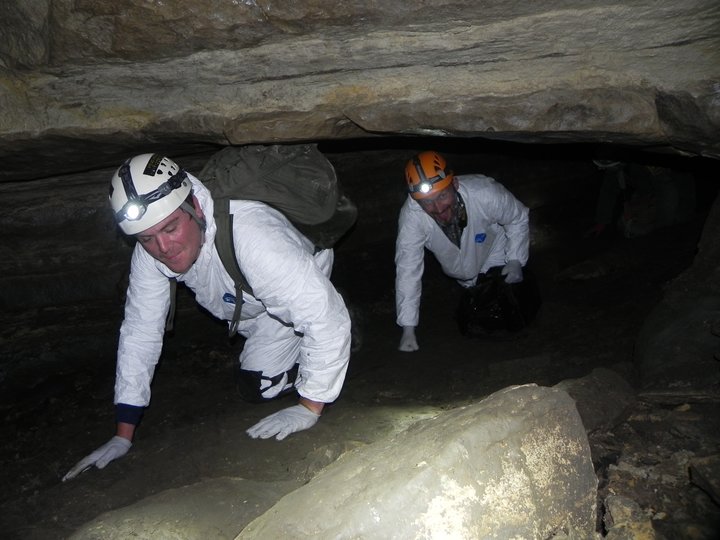 BOB BLANCHETTE: Well, the work definitely gives a better understanding of the role of fungi in these little-studied subterranean environments. We really don't know very much about fungi in these environments and we're finding that there are some very unusual fungi there. Many of these fungi are different species compared to fungi growing in above ground environments. We also found several different metal-tolerant fungi that can be used for bio-processing. One use is as a bio-filter to remove heavy metals. The Sudan Mine, which is now a Minnesota State Park, has to pump water out of it (to avoid it getting completely flooded and filled with water). This water picks up heavy metals as it moves through the mine and has to be treated to remove the metals as it is pumped out. One of our original objectives was to determine if we could use fungi to sequester the heavy metals as a possible biological filter. We have lots of really interesting fungi that appear to be able to do this. It is amazing to see these fungi growing in the mine on the wooden timber with such high concentrations of heavy metals that are present. Finally, we also have the fungi that are antagonistic to the White Nose syndrome fungus that could have a role in controlling this introduced disease of bats.