A unique space for student study, collaboration, and special events. See below for more information about utilizing the room for its various purposes.

The main function of the Land O Lakes, Inc. Collaboration Center (LOLICC) and the Borlaug Commons is student study and collaboration. The space is open to all University of Minnesota undergraduate and graduate students regardless of program affiliation. Student study groups and student organizations may reserve the small internal conference room (395B) through Google calendar. As time and space allow, the Borlaug Commons may also be reserved for special events and outreach activities.

Secondary use of Land O' Lakes, Inc. Collaboration Center (LOLICC) and the Borlaug Commons is engagement within the University of Minnesota community and between the University of Minnesota and the public. In this context, LOLICC will be made available on a limited basis for special lectures and seminars, training, workshops, receptions, and similar activities. The space is available to all UMN units with preference given to CFANS affiliates. Plant Pathology staff will be in charge of reservations for this space. Because the use of LOLICC for engagement activities has the potential to limit student accessibility, restrictions may be placed on the frequency and timing of events in order to achieve a good balance between the intended uses of the space.

LOLICC cannot be reserved for personal events or by individuals outside of the University of Minnesota without explicit consultation with and permission from Plant Pathology staff. Any reservations external to CFANS will need to provide a UMN chart string for a $75 fee per day. Reservations external to the University will need to work with the Plant Pathology staff to submit a payment of $150 per day.

Reserve for your event

Space is available on a first-come, first-served basis to the UMN community, with preference given to CFANS affiliates. All-day and multi-hour events during the academic semesters are unlikely to be approved unless the event falls outside peak student usage times. Plant Pathology staff will maintain all aspects of scheduling for the LOL Collaboration Center.

Any reservations external to CFANS will need to provide a UMN chart string for a $75 fee per day. Reservations external to the University will need to work with the Plant Pathology staff to submit a payment of $150 per day. Please contact the Department of Plant Pathology at [email protected] directly for non-CFANS reservations. Reservation of the smaller conference room within Land O’ Lakes, Inc Collaboration Center is free of charge for any student groups or CFANS units.

Use of 395 and 395B- small conference room in LOLICC requires that the users read and follow the following guidelines:

Borlaug Commons seats up to 50 attendees seminar-style. Reception-style events are most comfortable at a maximum number of attendees at 60-80, with fire code at 100.

This space will not be arranged for any users. Setup and takedown is the user's responsibility.

Assets for use free of charge:

Student study groups and student organizations may reserve the small internal conference room through Google calendars. The room contains a small flat panel with HDMI hookup. Users will need to bring their own laptop to use the screen.

Before requesting the small conference room, please be sure to check the google calendar on this page for availability. Fill out this form to reserve the room.

If you walked through the Plant Pathology Library in the mid-1980s you would have seen students and researchers gathered amongst shelves of books, professional journals and research papers. If you walk into that same room today, you will see a transformed space; a showplace of what modern libraries have become in the digital era.

The Plant Pathology Library dates back to 1985, when Borlaug Hall was built on the St. Paul campus. The 1,720 square foot upgrade from the original library area in Stakman Hall emerged as a partnership between University of Minnesota Libraries and the Department of Plant Pathology. Over the years, continued support from the generosity of donors helped the library remain a pivotal component to the student learning experience and plant pathology research, and also supported the maintenance and staffing of the library. Over time, the space began to be used less frequently and was in need of renovations that would meet the modern needs of students, faculty and staff. 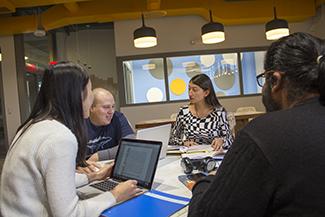 With the dawn of the digital era, the student learning experience and educational and research landscapes have shifted away from physical textbooks and journals, with an increasing move to digital content, and with students and scientists immersed in a culture with unlimited access to educational resources and information. At the University of Minnesota, libraries are changing and adapting to this new reality. Consistent with the idea of libraries' evolving roles in supporting modern education, Walter Library, the flagship location of University of Minnesota Libraries, underwent major renovations and today features the Digital Technology Center, the Learning Resources Center, Digital Media Center and the Minnesota Supercomputing Institute.

“As the educational needs of students and faculty shift, the way the library meets those needs must shift as well. Becoming spaces for engagement and creators of content is one of the ways libraries are changing to meet patrons' evolving needs,” says Plant Sciences Librarian Kristen Cooper.

Seeing this trend, the Department of Plant Pathology engaged in an ambitious effort to reimagine an updated Plant Pathology Library, and to align its mission with the contemporary needs of students and scientists. During the planning process the department received significant input from University of Minnesota librarians and from nearly 200 students. Students wanted a modern, eclectic decor and a space that accommodates individual study, group collaborations, quiet study and stress-reducing relaxation, with natural lighting and many electrical outlets. At the same time, the department sought an event space for departmental functions and scientific outreach programming that would enhance awareness of and appreciation for the field of plant pathology. It was with this idea in mind, to create a space that would facilitate traditional, individualized study and modern collaborative thought, that a plan and a new design emerged.

While the design phase was challenging, securing funding to turn the idea into reality was a real hurdle. With the support of the CFANS Student Fees Committee, Land O’Lakes, Inc. and contributors to the Plant Pathology Library Fund, the new vision began to take shape. In December the three-room suite that comprised the original library was named the Land O’Lakes, Inc. Collaboration Center in recognition of their financial support. The large open room that formed the main public space of the library was designated as Borlaug Commons, honoring Norman Borlaug and ensuring that the historic importance of the space to plant pathology, student learning and scientific engagement is honored for generations to come. Plans for inclusion of a permanent exhibit about Norman Borlaug in the Borlaug Commons are currently underway.

The books and journals that previously resided in the Plant Pathology Library were not forgotten or tossed aside. Most of them are available online and the University of Minnesota Libraries has created a plant pathology-specific landing page. The physical collection was relocated elsewhere within the libraries. Most materials were moved to Magrath Library, the main library on the St. Paul campus. Located a short walk from the Borlaug Commons, Magrath Library ensures that readers can still access hard copies as needed.

The new space has been a transformational success. Any day of the week you are likely to see 30 or more students in the space, working together, studying alone or just relaxing. The department and the college have also made extensive use of the space for special events and outreach. For example, the space hosted a welcome reception this summer as part of the North Central American Phytopathological Society regional conference and a closing ceremony for the 9 Billion & Counting: Abolishing Hunger food security symposium in October. The space has also been used to hold e-learning training exercises and K-12 outreach programs. Updating the Borlaug Commons ensures the continued success and vitality of the Plant Pathology Library for years to come.

“We see this transition of the Land O’Lakes, Inc. Collaboration Center and the Borlaug Commons to be a key step in making sure that we are being good stewards of donor dollars, and we really think of the space as the Plant Pathology Library 2.0,” says Plant Pathology Department Head Jim Bradeen.

+
View Photos of the Space