Ensuring Soybean Yields by Screening for Resistance to Fusarium graminearum

Being proactive in the race against pathogens is a priority in preventing soybean yield loss from pathogens such as Fusarium graminearum. Marissa Scherven, a former Plant Pathology undergraduate research assistant in Dr. Jim Kurle’s lab, is looking for resistance to F. graminearum in soybean, in order to prevent disease problems in farmer’s fields before they affect soybean yield.

F. graminearum is a relatively new threat to soybean growers in Minnesota. Until recently it was considered to exclusively be a pathogen of corn and small grains. However, recently it has been isolated from diseased soybean in Minnesota and other North Central states. F. graminearum is a fungal pathogen that affects plants by causing seed, seedling and root rot, which ultimately may lead to significant yield loss.

“This disease is a problem for farmers because soybean seed and seedling rots interfere with stand establishment. Plants that do emerge grow poorly as a result of root rot and the farmer will not know what is wrong. Once farmers do recognize that their plants are infected it is too late,” says Scherven.

Plants infected with the pathogen are difficult for farmers to detect since they do not display the typical foliar symptoms seen in other root rot pathogens, and the root lesions associated with infection by F. graminearum are similar to other root rot pathogens. As a result of these difficulties associated with detection, disease management is a challenge. Recent breeding efforts for developing resistance to the pathogen have recently been initiated, however, no major resistance genes have been identified. 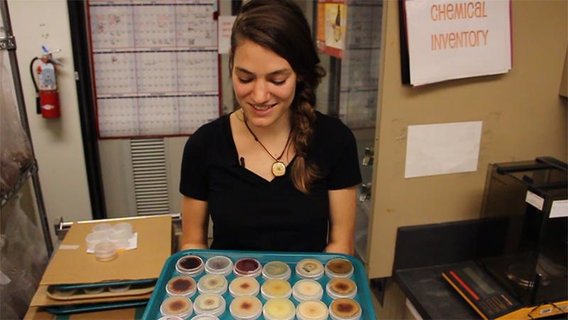 Scherven’s research aims to find a solution to this problem by helping find resistance, which will stop F. graminearum problems before they start. Scherven’s research project screened 280 different soybean varieties from the University of Minnesota’s soybean breeding program for resistance to F. graminearum via a process called phenotyping. Through this process, Schreven identified those varieties that displayed resistance to this pathogen. The varieties that were assessed, which were parents of many of the varieties developed by Jim Orf, the University of Minnesota soybean breeder, were evaluated for their response to the pathogen when grown in soil inoculated with F. graminearum.

“Through this method, our team helps provide unique information about resistance that is associated with the genetic information that is gathered from research conducted in the Department of Agronomy and Plant Genetics,” says Scherven.

Scherven’s phenotypic results are combined with genotypic information developed for the 280 soybean varieties and then the varieties are analyzed for the presence of markers associated with resistance to F. graminearum by Liana Nice, formerly a post-doc in Dr. Nevin Young’s laboratory who is now conducting research with Dr. Aaron Lorenz, University of Minnesota soybean breeder.

Combining both the phenotypic information from Scherven and the genotypic information from the Department of Agronomy and Plant Genetics, resistant soybean lines can more accurately be identified. The selected resistant varieties will then be incorporated into the University of Minnesota’s soybean breeding program. The goal of this on-going collaborative effort is to develop lines that resist infection by commonly occurring pathogens and maintain constant yields for farmers across Minnesota.