In order to learn more about how barley resists disease, Graduate Student Matthew Haas analyzes its genetic profile. Current technologies allow researchers like Haas to observe hereditary information that resides within a plant’s DNA. A plant’s DNA comprises billions of nucleotide building blocks and Haas utilizes tools that allow him to efficiently and accurately provide biological meaning to this information by understanding which genes or genetic relationships allow a plant to recognize and resist pathogens. “Since the barley genome is almost twice the size of the human genome, methods of reducing data complexity are essential for being able to draw meaningful conclusions,” says Haas.

During a recent internship at Leibniz-Institut für Pflanzengenetik und Kulturpflanzenforschung (IPK) in Germany, Haas expanded his knowledge of the computer programming tools essential for making sense of large sets of genetic information. With the support of departmental funding Haas spent three weeks at IPK, a premier plant genetics research institute located in Gatersleben, to improve his computing abilities and advance his research on Spot blotch (caused by Cochliobolus sativus) of barley. 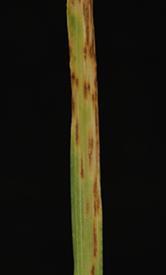 Spot blotch is a historically important disease in the Midwest, causing significant yield losses in barley fields. Previous research revealed the genomic location of different barley genes that confer disease resistance, and Haas’ research expands on what is known about these genes by investigating how they function at a molecular level. Working with IPK partners, Haas acquired new analytical computing skills to assist him with efficiently recognizing differences within barley plants’ genetic data that cannot be read by humans. These minor differences have a major effect and Haas’ research will increase the understanding of what allows barley to resist Spot blotch.

The skills Haas learned at IPK will continue to inform his research and allow him to independently and more efficiently analyze large data sets. “I was able to improve my own computing abilities so that I would not be dependent on others when conducting research, and learn new computing skills that allow me greater flexibility and control over my data analysis,” says Haas. On the trip to IPK Haas also learned about other computational tools useful to his research, as well as genomics in other crops such as rye. “Overall, my research experience at the IPK was a positive and productive experience.”