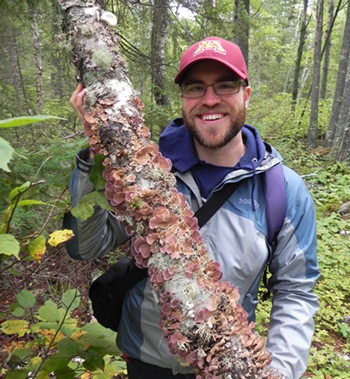 Trying to find a needle in a haystack can seem like an insurmountable task, but imagine attempting to find 100 needles in 100 haystacks. This is a more apt description of the task that faces Josh Kielsmeier-Cook. Josh, a PhD student in the Department of Plant Pathology advised by Bob Blanchette, is currently studying fungi in Yasuní National Park in Ecuador, where there are not only 100 needles, but 100 unique needles that need to be classified and cataloged.

The region of the Amazon Rainforest where Josh is conducting his research is one of the most biodiverse locations on Earth. One hectare, or almost 2.5 acres, in Yasuní contains more species of trees than in all of North America. In addition to thousands of tree species, there are also thousands of species of insects and, most importantly for Josh, thousands of different fungi. “Yasuní is an incredibly beautiful and diverse place, it is pretty magical,” says Josh.

Unfortunately, this area of vast diversity is under threat, as oil drilling is rapidly developing in parts of this UNESCO designated biosphere reserve. For Josh, the race is on to classify the diversity and better understand the ecology of one particular fungal genus, Xylaria, which may be useful in pharmaceuticals and bioenergy production.

The genus Xylaria is a group of fungi that has great genetic diversity, and “in this particular location [the Xylaria] are hyper-diverse.” Josh goes on to explain there are almost 700 named species of Xylaria some of which may be duplicates and represent multiple species. The last known published treatment of these fungi was in the late 1950s by a British mycologist, R. W. G. Dennis. Previously, Xylaria was classified by more subjective criteria such as physical characteristics.

Josh’s research, which relies on close collaboration with CFANS Plant Pathology alumni Charles Barnes and Maria Ordoñez (Universidad de las Américas Quito and Pontificia Universidad Católica del Ecuador, respectively), involves sampling the fruiting bodies of Xylaria by extracting DNA to sequence a specific region of the fungi’s genome. This is the beginning of a process to gather genetic data, which can be used much like retailers use a barcode to look up specific products. The genetic data that is gathered from this process is compared to previously published reference sequences, in order to discover which of these reference sequences the specimen most closely matches. This data will then provide a more accurate picture of the Xylaria found in Yasuní, as opposed to older methods of classification, which relied merely on physical characteristics of the fungi to place them into classification groups.

The classification of the Xylaria genus comes as a byproduct of a larger goal to better understand how the diversity of Xylaria impacts the ecology of this rainforest. Josh’s preliminary findings have revealed that Xylaria have many different complex and diverse ecological roles or lifestyles. While Xylaria primarily occupy a saprobic lifestyle in Yasuní, decaying dead plant matter, evidence suggests that they may also be endophytic, living within host plants, potentially enhancing growth and the plant’s ability to tolerate particular stresses.

Ultimately through his research, Josh hopes to learn more about the relationship between the genetic variation within this one genus and the possible link between the saprobic and endophytic lifestyles. The answers to these questions may shed light on other important uses for Xylaria as well as help explain the potential impact these fungi can have on medicine and bioenergy production. Josh plans to continue his investigation of these questions on future trips back to Yasuní with the aid of departmental fellowships and external awards.

These past and current awards have, as Josh states, “given me the great opportunity to explore this fascinating ecosystem in Ecuador and Yasuní National Park.”